June 06, 2010
Saturday started as a baking hot day in the high twenties - not ideal for the morning after the night before, especially when the party hasn't even started yet! A very leisurely walk around the Barton Mills Scarecrow Festival for the benefit of the children who had spied opportunities for us to part with some cash in the ice-cream vans and bouncy castleswas followed by an ever more relaxed afternoon with the fire being lit around 1.30pm.
The lamb was stuffed with different marinades and put on the spit around 2pm being turned diligently by college friends Saki and Adam under my insistent but only occasional supervision whilst others turned up from time to time and needed help erecting tents. Beer was the drink of choice at this point.
We did eventually - inevitably - move onto wine as the evening approached with the first glasses being filled with Domaine de Cristia's VDP Grenache from 2009 but tasting so advanced for a wine only seven months old. This wine astounds me - it sells for only £7.50 but has so much going on and really incredible depth. For the meal itself, I found a jeroboam of Chianti I had been given a couple of years earlier. Not a bad wine but slightly diluted compared with the Cristia. Adam has long been a Fleurie fan so I brought out a magnum of Domaine de la Madone's 2002 Vieilles Vignes which Jean-Marc gave me a few years ago as well as a magnum of Cristia's 2003 Chateauneuf-du-Pape. Another friend, Chae, had brought a rather decent Rioja from the 2001 vintage, much more interesting fruit than the 2003 Ribera del Duero I received a few days earlier and with oak that was very much present but not bullying the fruit into submission.
By this time the meal was over and the fire rebuilt so, gradually, everyone moved over to find a spot from which they would not move for the next several hours. The Vieilles Vignes Grenache from Domaine de Cristia had a lovely lightness of touch without being a lightweight wine at all but after the CDP and Rioja, a different dimension was required. However, it was straight back onto a Rhone retrospective with the next two wines from Raymond Usseglio: the 2007 Cotes du Rhone and 2006 Chateauneuf both excellent with the former showing the qualities of this vintage (superb fruit but, perhaps, just a touch too much alcohol) and the latter showing the class of the appellation (2006 is particularly forward for this wine).
I did notice an opened bottle of Mordoree's Reine des Bois Lirac from 2001 when I came downstairs this morning but I had gone to bed before this cork was pulled! 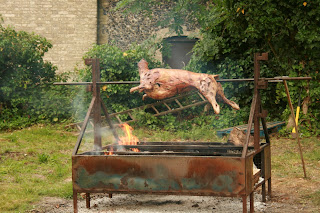