2013 Burgundy: Joblot and Lienhardt, first taste from the bottle

November 28, 2014
First impression: they used not only the same label designer but the same design. It doesn't matter, of course. Actually it lends a certain elegance to the set of eight bottles I have lined up in front of me.

Second observation: every wine is just 13% ABV. OK, so that's neither high nor low for Burgundy but still very welcome these days.

Now the wines: in what order? The Givrys first or the Cotes de Nuits wines? I think that's probably right so, starting with Domaine Joblot, I will try them in this order: Pied au Chaume, Cellier aux Moines, Clos de la Servoisine. Then, Antoine Lienhardt's Essards, Plantes au Bois, Vignottes and, finally, the NSG Charmois.

It's going to be a long night! 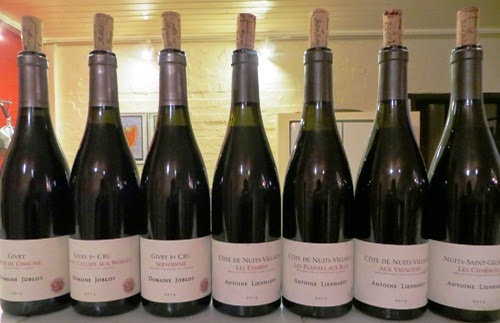 Domaine Joblot, Givry 2013 Pied de Chaume
The entry-level wine from Jean-Marc Joblot and his daughter, Juliette, is light and bright on the (youthful) nose. The palate is more expressive with sweet red fruits. Fairly approachable now, it will be better in another year or two (but that's not a problem: there is still a little 2010 and some 2011 in stock!).

Domaine Joblot, Givry Premier Cru 2013 Cellier aux Moines
Deeper colour and a richer, fuller nose with slightly blacker fruit. The oak is quite pronounced on the palate but this will fade. Quite candy flavoured, with a great finish, this needs a little time to integrate so that the sweetness of the fruit gives way to the more savoury notes currently lurking in the background.

Domaine Joblot, Givry Premier Cru 2013 Clos de la Servoisine
Similar to the Cellier aux Moines in many ways but, perhaps, a little more together and complete at this stage and a little more structured. I would like to re-visit this in five or six years' time!

Antoine Lienhardt, Cote de Nuits Villages 2013 Les Essards
The first of Antoine and Juliette's wines has a slightly muted nose and surprisingly feminine palate but the backbone is undeniably Cote de Nuits. The fruit is more red than black and the oak will play an excellent supporting role when it is more integrated.

Antoine Lienhardt, Nuits St Georges 2013 Les Charmois
This clearly needs time to soften at the edges but the fruit, structure, balance etc are all superb. This is going to be a great wine.

An impressive haul. If these estates' wines are anything to go by, 2013 looks like a vintage to check out further (just as long as prices don't go crazy).

November 10, 2020
The moratorium is over. Decanter’s December issue has been published and I can announce our successes in the recent tasting undertaken by their Rhône expert, Matt Walls who has recently returned from a year and a half in the region. If you look on Decanter.com today (November 2020), you will see a link to ‘Top Côtes du Rhône wines under £20’. What the article doesn’t tell you is that the brief of its writer was to taste and rate wines from across the valley in that price range and that the top scoring white wine was actually a Ventoux. No prizes for guessing that it was  Château Juvenal’s 2019 ‘Ribes de Vallat’ Blanc , awarded 91 points, which, at £12.60 is also the best value of any of the white wines on the list: 'From 30- to 40-year-old vines grown on granite south-facing slopes; half of the wine is matured for six months in demi-muid leaving no overt oakiness to the aromatics. Full-bodied, rich and opulent style, very ripe and fulsome. Some mango and pineapple juice. Unmist
Post a Comment
Read more

April 29, 2021
Simple labels adorn the bottles of these highly effective and enjoyable wines which have a distinct nod to the northern Rhône and even Burgundy and Bandol despite their southern Rhône setting. Described by Robert Parker as ‘one of the best estates in the entire Rhône Valley’, Domaine Ste-Anne has been in the Steinmaier family since 1965 when it was bought as a holiday home for this Burgundian family. Guy Steinmaier quickly recognised the potential of the 12 hectares of vines and set about replanting them.   Now under the stewardship of his son Jean, who studied winemaking in Beaune before taking over in 1977, they have remained consistent throughout making remarkably un-Parkerised wines (that is to say, these are elegant and refined rather than the blockbusters generally regarded by the former uber-critic). A quarter of a century since Parker wrote those words, Domaine Ste-Anne remains synonymous with the Côtes du Rhône Village of St-Gervais. Today the range is much the same as it was
Post a Comment
Read more

Joblot in the glass

February 09, 2021
Always one of my favourite tastings: the new vintage – in this case the 2019s – of Domaine Joblot’s wines from the bottle and, better still, in the comfort of my own home. 2019 has been much lauded but, thanks to Covid, only a very few people have tasted widely around the vintage. Jancis Robinson said of the wines she tasted, ‘ the wines were delightfully easy to like ’ although she rarely looks at the Chalonnaise which can be viewed as unfortunate for the top estates there but, perhaps, lucky for us since it keeps prices down and wines available. Anyone wanting to delve into Joblot’s wines could either choose any available vintagesand try wines from across the range or follow particular cuvées across a range of vintages (horizontal or vertical comparisons).   Juliette was clearly pleased with the way the wines turned out and rightly so. They tend towards sweetness in their youth but that is necessary for the wines to show at their best after 5-10m years (they will last much, much long
Post a Comment
Read more