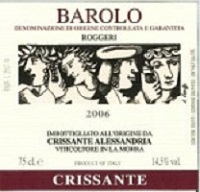 2006 in La Morra was a year of tannic monsters. The Serradenari Barolo was one such wine but fairly good natured by comparison to Crissante Alessandria's 'Roggeri'. When I was first assaulted by this cuvee, I thought there was fruit lurking somewhere and was persuaded that, given time, it would come good. Now, ten years on, my potential gullibility has given way to faith in my trusting nature. This is a fantastic Barolo on the elegant end of the spectrum (in contrast to an equally enjoyable but far more expensive Sandrone Barolo enjoyed recently) with tannins that dance to the tune of the violin sonata this wine evokes. Fabulous stuff.

Another oldie, relatively speaking, was the 2009 Les Hauts de Montmirail from Domaine Brusset enjoyed after an equally inspiring (and reassuring) 2009 Anonyme from Xavier Vignon. Why reassuring? Because 2009 was a hot vintage and wines often tend towards blowsiness. Not these two, certainly not at ten years' old anyway. Very refined with delicious length.

Domaine Ste-Anne's wines continue to blossom with the 2016 Viognier impressing me as far and away the best southern Rhone expression of this tricky variety. Indeed, I would go as far as to say it is the best Viognier outside Condrieu and Chateau Grillet. Too often, examples of this variety from the southern Rhone (and even more so from the Languedoc) are over-ripe and blowsy. They seem impressive at first but try getting through the tasting measure, let alone a glass and you can struggle. The Steinmayer's wine is the antithesis of this. Power exudes this wine which is all about subtlety and elegance. It probably won't win in a blind tasting where Kiwi cordials are the traditional victors but it's a wine a can enjoy to the last drop. The 2015 St-Gervais 'Mourillons' is a rather good Syrah too, very much in the style of a very good northern Rhone (it may be that I prefer the Mourvedre cuvee, Rouvieres, but, being Mourvedre, it needs a couple more years).

As a Pinot-phile, I am constantly on the lookout for examples which are satisfying yet affordable. The Joblot wines tick both boxes (certainly the first and, relatively speaking, the second) and I have enjoyed a few bottles recently but there are a handful of other wines which may offer even better value. When Juliette Joblot asked me to taste the wines of her husband, Antoine Lienhardt, I was afraid they may not match up but, at six years old, his 2013 Cote de Nuits Villages cuvees are turning into rather glorious wines at very low (for Burgundy prices) with the 'Aux Vignottes' cuvee my current favourite.

In the Cote de Beaune, Justin Girardin's 2013s (bottled under his father Jacques' name) are powerful Santenays with both Maladieres and Beauregard ready to enjoy now. That said, I anticipate enjoying them even more in another five or six years time.

Back in Italy I have enjoyed (as always) all the wines from Nada Giuseppe and Fabrizio Battaglino in recent months but that's too obvious to anyone who knows these estates. In some ways, then, more interesting has been the pleasure from Monte Rosola's 2004 Crescendo, better than ever before, a fabulous pure Sangiovese from vines which were only a few years old when this vintage was harvested. From the Veneto, I Campi wines - including some new ones which will be arriving soon - have been a source of much pleasure: always the reds but, increasingly, the whites too. More on these soon...