May 22, 2020
Like almost everyone else, I am staying at home almost all the time except for daily walks (I haven't run anywhere since I left school) and weekly trips to the supermarket. I did manage to find a local baker who sells flour by the sack so, inevitably, I have been trying my hand at sourdough. Not the prettiest loaf but quite tasty. 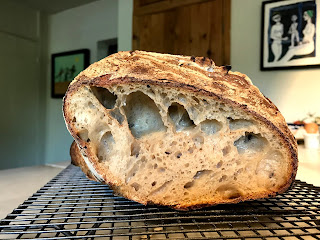 Anyway, back to work. I have been quiet recently as (a) I thought I would take the opportunity of an extended period without school runs (so more time to get things done) to re-work my website (to be unveiled soon, I hope) and (b) lots of people have been enjoying wine so I have been kept busy with that side of things. This has necessitated new purchases so, along with I Campi and Chateau Juvenal, I have just taken delivery of a consignment from Domaine Ste-Anne near the sleepy southern Rhone village of St-Gervais.

The cellars at Ste-Anne are clearly very old. You have to walk through several sections before reaching an opening where wine tastings are conducted, often by winemaker, Jean Steinmaier who, with his brother Alain owns and runs the estate. It was their father, Guy, who arrived here from Burgundy in the 1960s and established what Robert Parker called 'one of the best estates in the entire Rhone Valley'.

The range comprises a very successful pair of Cotes du Rhone wines. The white has proved very popular in the past so, of course, we have brought it back (2017 vintage: very successful) but we decided to bring in some red as well this time - 2018 is an opulent year so the youthfulness of the wine is not an issue. Juicy fruit from Mourvedre, Syrah and Grenache with, I believe, some Cinsault too, medium-bodied but with more depth on the palate than an initial sniff would suggest.

The star wines in the collection are the mono-varietal wines, in particular the Viognier (which has to be bottled as Vin de France) which is almost certainly the best example of this variety in the whole of the southern Rhone and, frankly, better than quite a lot of Condrieu even though it is less than half the price.

We still have good stocks of the increasingly stylish 2015 Rouvieres from 100% Mourvedre so we loaded the rest of the pallet with some 2017 Mourillons, pure Syrah, aged in barrel (the only wine in the range to see any wood). This is always a winner with us but 2017 was the third successive successful year and the sweetness of the fruit really shines out this year. The nose has a little vanilla from the barrel as well as gorgeous blackberry fruit. This all follows through well on to the palate which has good spice and dancing tannins. A lovely wine which we will be enjoying with barbecued red meats in the summer months and roasts later in the year (and over several years, no doubt).