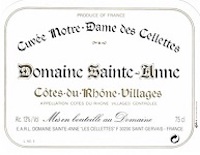 Simple labels adorn the bottles of these highly effective and enjoyable wines which have a distinct nod to the northern Rhône and even Burgundy and Bandol despite their southern Rhône setting.

Described by Robert Parker as ‘one of the best estates in the entire Rhône Valley’, Domaine Ste-Anne has been in the Steinmaier family since 1965 when it was bought as a holiday home for this Burgundian family. Guy Steinmaier quickly recognised the potential of the 12 hectares of vines and set about replanting them.

Now under the stewardship of his son Jean, who studied winemaking in Beaune before taking over in 1977, they have remained consistent throughout making remarkably un-Parkerised wines (that is to say, these are elegant and refined rather than the blockbusters generally regarded by the former uber-critic). A quarter of a century since Parker wrote those words, Domaine Ste-Anne remains synonymous with the Côtes du Rhône Village of St-Gervais.

Today the range is much the same as it was then: a red and white Côtes du Rhône, both fruit-forward with a lightness of touch and easy to enjoy. The red is dominated by Mourvèdre and the white a blend of the three northern Rhône mainstays, Roussanne, Marsanne and Viognier.

After this, the only white is the pure Viognier, bottled as Vin de France which Rhône critic Matt Walls, his recent book, Wines of the Rhône (a good read from cover to cover, by the way), describes as ‘another highlight’ and Parker wrote ‘it is stunning – not only the most successful Viognier in the souther Rhône but similar to a very fine Condrieu’, especially in a vintage such as 2018.

The range of red wines is more extensive. First up the ladder is the Côtes du Rhône Villages ‘Notre Dame des Cellettes’, named after the hamlet where the estate is to be found, a Grenache-based cuvée which has a lovely lightness of touch unlike too many of its counterparts further south. Perhaps this has something to do with Jean’s Burgundian roots, perhaps it is more about the relatively northerly location of these vineyards which emphasise the finesse too often missing from Grenache wines from elsewhere in the valley. The 2015 and 2016 make for interesting comparisons with the former offering a little more svelt tannin and the latter a touch more perky acidity. Both are highly drinkable as we experienced in one of our first outdoor drinks with some friends last week.

There are two other reds in the range, both mono-varietals. The St-Gervais- Côtes du Rhône Villages ‘Rouvières’ is a Mourvèdre which Walls cites as being ‘particularly expressive’ with more in common with Bandol than most southern Rhône examples of this variety. Typically needing seven years or so to come round, the 2015 is beginning to find its feet now.

Finally, the only wine in the range to be aged in wood is the pure Syrah St-Gervais-Côtes du Rhône Villages ‘Mourillons’ – the 2015 is closer in style to a good northern Rhône red but at around half the price.

Indeed, value is a given with Ste-Anne with the wines all priced between £10.50 and £18 and, for the next week it’s even better with a mixed dozen of the four Côtes du Rhône Villages reds reduced by 10% or a mixed dozen and a half, including the two whites, also reduced by 10% when paid by BACS (delivery surcharges apply to orders under £200 as always) so now is the time to discover what Parker described as ‘the natural textures and pure, ripe fruit’ of Jean Steinmaier’s excellent wines if you haven’t already (and, if you have, no doubt you will be taking advantage of this offer!). Email now to take advantage of the offer.