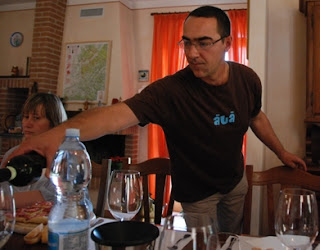 Over to Roero on Monday evening, the other side of the Tanaro river so no longer in the Langhe. This is a region which has been overlooked by consumers hunting down the more famous wines of Barolo and Barbaresco but here there are Nebbiolo wines not to be ignored. At a lunch in London back in February, I tasted through thirty or so wines from this area and was pleased to note that the one that stood out was one of Fabrizio's which I was due to re-taste - properly - with Fabrizio Battaglino at his family's house.

We started off with the white wine, a Roero Arneis 2011. Fabrizio does not want to have anything to do with non-native grapes which is the right choice for him although it may give him something of an uphill struggle when it comes to marketing such wines. Thirty years or so ago, there were few Arneis wines produced; rather, it was used to soften the Nebbiolo, much in the same way as Viognier is used in Cote Rotie. Now there are a good number of these wines around. To my palate, it has much in common with Marsanne (rather than Viognier, but Marsanne is still blended with Syrah at some Northern Rhone wineries) and, whilst it would never be mistaken for Hermitage, there are similarities. The 2011 seems a little sweeter than the 2010 but it still has good minerality and acidity. Good.

The Barbera d'Alba 2010 is more serious than most. You wouldn't know it had seen any oak, the fruit is so intense but, whereas the 2009 seemed to need a few years in the bottle, I could drink this now. This was true - more or less - with the three Nebbiolo wines. Fabrizio makes serious, ageworthy wines but the straight Nebbiolo d'Alba 2010 is a pretty-fruited wine with manageable tannins.

More serious is the Nebbiolo d'Alba 2010 Colla, the wine I tasted first back in February. This has quite amazing fruit, richer and fuller than any Nebbiolo I recall having tasted. Lots going on here and the fruit subdues the tannins well. The balance is excellent. As a footnote, we drank a bottle of this a few days later and found, as the bottle drained, the wine opened more and more splendidly. Next time I will open the bottle a couple of hours in advance. By way of contrast, Fabrizio had a bottle which had been opened for a couple of days but I found the fruit had faded a little whilst the tannins remained in place.

The last wine in the line-up is the Roero 2010 Sergentin which, whilst not as showy as the Colla at this stage, is perhaps, ultimately, a more sophisticated wine. It oozes elegance, even more so than the other wines, and hints of the multiple layers that will undoubtedly develop over time. I am going to enjoy watching this wine!

As ever, a fabulous set of wines which UK consumers will, in the main, overlook no doubt which is their great loss. Serious wine drinkers should be checking these out and supporting intelligent winemakers like Fabrizio whose total production of 25-30,000 bottles is never going to make him rich but, on the contrary, is so small as to ensure that every bottle has received the attention it needs to make it a truly great experience.