Nada Giuseppe visit but no Enrico this year 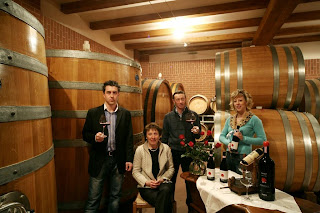 With Enrico Nada on holiday in Sardinia, his parents and sister Barbara were perfect hosts during this year's visit to Nada Giuseppe. Whilst I have been trying to learn a little more Italian, I still have to rely on the better language skills of my hosts which is shameful; I must do better next time (although Enrico will probably be there and his English is extremely good so I am fighting a losing battle - but one I will continue to fight!). Still, even without Enrico the conversation flowed as well as the wine.

The wines, as expected, were extremely good, perhaps better than last year, especially the top wines. We started with Armonia 2011, the estate's only white wine. The nose is quite youthful and hints of the blend that it is (I assume it is the same as the 2010 which included Arneis, Favorita and Sauvignon) and a touch of oak. There is some interesting fruit here which comes through well on the palate which has good definition: rounded but good acidity to back this up and some attractive spiciness. It has a quite long, spicy finish with better acidity and more flowery notes than the previous vintage, I thought. As a footnote, Barbara gave me a bottle to take away which had the chance to open up as the bottle progressed (which shows the value of taking a bottle away!) and became more glorious as the bottle emptied. Funny, that! 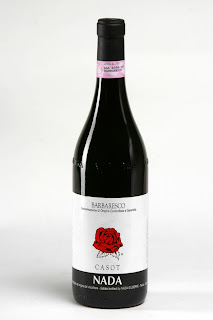 Straight onto the Barbaresco 2009 next with a wonderfully rounded nose, full and rich with sweet but spicy fruit. A medium-full body accompanies this young but approachable wine which seems already more forward than either the 2007 or 2008. It has a superbly rounded mouthfeel and lovely, open Nebbiolo fruit. This is a very good wine with an enticingly perfumed finish with the spice lingering to the end. The tannins are soft and the acidity seems lower than in other vintages (or better integrated, perhaps); in any case, this wine has great balance and is going to be an excellent Barbareseco for drinking over the next 10-15 years.

Note: I re-tasted this wine a few days later. This confirmed my feeling that this is one of the very best wines I tasted during this trip. The balance between fruit and the structural elements is quite exceptional.

The Barbaresco 2008 followed. Possibly better in the long run, it still has a slight hardness that I noticed last year (which reminds me of some of the 2005 Rhone wines which took longer to open up than the 2004s or 2006s, for example). It is very similar otherwise and very much as remembered from last year. A more classic vintage? Barbara agreed. I felt it needs another 5-10 years but will last until 2025. I re-tasted the 2009 again after this which confirmed my preference for the younger wine for current drinking.

The Barbaresco Riserva 2007 does not bear the name of the Casot vineyard on the label - Enrico later informed me this was a bureaucratic oversight but the wine is still from Casot. It is slightly deeper in colour than the Normale and is less oaky than the 2006 was so the sweet Nebbiolo fruit comes through well. It has soft tannins and a medium-full body with fairly low acidity - it is very similar to the 2009 but with the added richness and complexity of a wine two years older that has been treated with even more respect. A couple of days later, I compared it with the 2006 which proved immensely popular. There is a greater difference between these two vintages than between the different vintages of Normale but I would struggle to say which I prefer. Both are irresistible!

We ended the tasting with the Barbera d'Alba Superiore 2009 which, being Barbera, is deeper in colour than any of the Nebbiolo wines. It is rounded if a little sharp but I don't need to remind myself that (a) I am tasting it after the wonderfully rounded Barbaresco wines and (b) this is Barbera which has naturally high acidity, making it a great wine for pizza or pasta. A bite of the cheese Signora Nada provided showed the necessity of appreciating many Italian wines with food as it brought out some of the wine's more subtle aspects.

A few days later I received an email from Enrico asking what I thought about the wines, including the Dolcetto - we had been too busy talking to remember to taste this. Aaargh!