S&M with brisket of beef 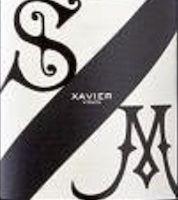 They say that blog writing is all about attention grabbing so I hope my cheesy title to this post will do the trick. Technically I have stretched the point: Xavier Vignon's gorgeous wine is called "SM" according to the label but the letters in question stand for Septrionale (the French name for the Northern Rhone) and Meridionale (you guessed it, the Southern Rhone) so, given that this is a blend of grapes from both regions, S&M is really what it should be called.

Not just any grapes, of course. The S could also stand for Syrah, the Northern Rhone's only permitted red grape (there's a statement that's bound to get a response - someone will assuredly know of a wine with something else in it that started out red) and not just any Syrah but Syrah from Cote Rotie which, along with Hermitage produces the best wines in the region.

In its original outing, "SM" was called "Sacrilege" because Xavier thought purists would find it borderline offensive that anyone would mix grapes from such an exalted Syrah vineyard with Grenache from the south, especially when the Grenache in question was grown in Chateauneuf-du-Pape. This landed him in trouble though as, when he labelled the wine Cotes du Rhone, he was told this was outside the regulations. Chateauneuf-du-Pape wines, it seems, cannot be downgraded except to lowly Vin de France. "Sacrilege" became one of the most exulted (and expensive) Vin de France bottles that year.

The next time around, he sourced his Grenache from Gigondas which meant he could label it as Cotes du Rhone. I'm not altogether sure why. The story of a Cote Rotie/Chateauneuf blend bottled as Vin de France probably has more about it than a Cote Rotie/Gigondas Cotes du Rhone but, hey, it's all good wine so I'm not complaining.

What about the wine, then? It's powerful yet restrained on the palate, forceful yet demure. A mass of contradictions except insofar as it is good. No, it's very good. More important in the context of this blog is that it goes outrageously well with brisket of beef, at least it does the way we have it here.

This can be cooked slowly in a conventional oven but it really is best cooked sous vide at 70°C for 30 hours or so, in which case trim as much fat off as possible, coat with Dijon mustard and rub in the marinade, seal and start cooking (no need to marinade although it won’t hurt). When it's finished in the sous vide, it should be seared in a frying pan or, better still, over a hot barbeque. Serve with the sauce below. Any leftover meat should be chopped into the sauce and served up with a baked potato as an alternative to chilli. So, that's two meals in one. 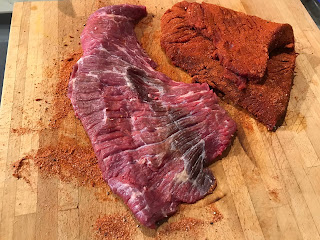 
Sauce – cook up:
1 onion, chopped and softened
1/2 red pepper, chopped and added to the onion
2 cloves garlic, as above
1 red chilli (optional)
1-2 tins of tomatoes (according to preference)
Salt & pepper
1 tsp smoked paprika
2 tsp oregano
1 tsp ground cumin
Beef stock (if the meat was cooked sous vide, there will be some liquid with this which should also be added to the sauce - no reason to waste it!)_Serve with diced chips or with salad (or both) in home-made wraps.

April 17, 2020
Wine stocks have been running low recently. After the dry pasta and paper products flew off the supermarket shelves, it was the turn of the wine aisles to empty and it wasn't long before many people realised they didn't really like what they found there. Rather than give up wine (although, apparently, some people have done precisely that), it soon became clear that wine merchants are in the category of permitted business so many of us saw huge spikes of trade, especially in the run up to Easter weekend. As I say, wine stocks have been running low. It is good news, then, that we have been able to start to replenish our supplies but even better news that our first pallets are coming in today from Italy. I hope this signals that, as we are being told, we are over the worst of the crisis and things will soon start to normalise (not just yet though). I CAMPI is an estate we started to work with a couple of years ago but, for some reason, I never fanfared the arrival of the w
Post a comment
Read more