What to do with leftover Nduja

It's one of those ingredients you sometimes see on the menu in a pizza restaurant (or used to in the days when you could go to a pizza restaurant) but possibly felt too intimidated by the spelling to ask for it (semi-reliable sources tell me it's en-doo-ya). A friend gave me some for my birthday a couple of weeks ago and, having tried it on its own (very tasty but there's quite a lot of raw heat there) and on pizza (very, very good), I wondered what else I could use it for. Of course, I could simply rely on the internet but where's the fun in that?

We had some pasta left over from a lasagne a few days ago - I know it's not really lasagne season but another family birthday means we have to eat all sorts of things which would be far more digestible if he had been born six months earlier or later - so wanted to come up with something simple. Actually, the pasta didn't turn out so well but the sauce was extremely tasty and simplicity itself. 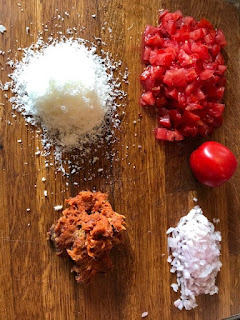 Just four ingredients (six if you're being pedantic): finely chopped shallots, softened in a pan with a little olive oil (I don't count the oil as an ingredient), then add the nduja and cook for a minute or two before adding a slug of white wine (I had a bottle of Domaine Ste-Anne's Cotes du Rhone Blanc to hand - wine, of course, is another thing I don't count as an ingredient) and cook down for a couple of minutes then add finely diced tomato (the best you can get hold of). Cook this over a low-to-medium heat and, when it's stewing a bit - it's good to keep the tomato pieces in tact a little - add some grated Pecorino. That's it. No need for seasoning as the nduja is so powerfully flavoured.

Serve over or mixed in with linguini or whichever pasta you prefer and have plenty of finely grated Grana Padano to hand and a green salad.

Of course, you'll need a glass or two of wine to go with this. Something bright and fruity works well so the Ste-Anne is a definite possibility although we had Chateau Juvenal's Ventoux Blanc 'Ribes de Vallat' which was a good choice.

Another suggestion was to crumble some in with vegetables to be roasted: onions, peppers, that sort of thing, potatoes even.

Any more recommendations would be appreciated. It's rather good but there are only so many pizzas I can eat!

April 17, 2020
Wine stocks have been running low recently. After the dry pasta and paper products flew off the supermarket shelves, it was the turn of the wine aisles to empty and it wasn't long before many people realised they didn't really like what they found there. Rather than give up wine (although, apparently, some people have done precisely that), it soon became clear that wine merchants are in the category of permitted business so many of us saw huge spikes of trade, especially in the run up to Easter weekend. As I say, wine stocks have been running low. It is good news, then, that we have been able to start to replenish our supplies but even better news that our first pallets are coming in today from Italy. I hope this signals that, as we are being told, we are over the worst of the crisis and things will soon start to normalise (not just yet though). I CAMPI is an estate we started to work with a couple of years ago but, for some reason, I never fanfared the arrival of the w
Post a comment
Read more